Sao Joao, also called São João, is a Christian religious festival celebrated in Goa every year on June 24th. Extremely popular in North Goa, it is held just after the official onset of the monsoon season. Dedicated to St. John the Baptist, a feast is held on this day. Though this is a Catholic festival, but it has become so popular in Goa that even non-Christians and tourists too are seen taking part in it. The Sao Joao festival is held 6 months before Christmas on December 25th.

The main celebrations are at Siolim in North Goa, close to the Siolim Church. There is a boat festival held here. Many boats, decorated like floats as seen in the Carnival, would come from Arambol, Chapora, Anjuna, Badem and other places. There is a lot of festivity all around as people decorate themselves with flowers, leaves, unique headgear, and wear masks. Many leap into the Chapora River, wells and pools to swim. There is music and a party-like ambiance. Free fruits are distributed.

Sao Joao has a long history in the state. The festival originated during the rule of the Portuguese. As per Christian scriptures, the saint leapt with joy even in his mother’s womb, when she learned of the birth of Jesus Christ. Later, John would baptize Jesus in the Jordan River. The wells where people jump now in Goa, represents the womb, and the act of jumping is a representation of his joy at hearing the news. This is why Sao Joao is a tribute to the St. John the Baptist.

The main celebrations are at Siolim in North Goa, close to the Siolim Church

The Sao Joao festival is held throughout the Christian world, but it is unique in Goa, especially Siolim, because young men would jump into wells to retrieve gifts. There is also a boat festival. 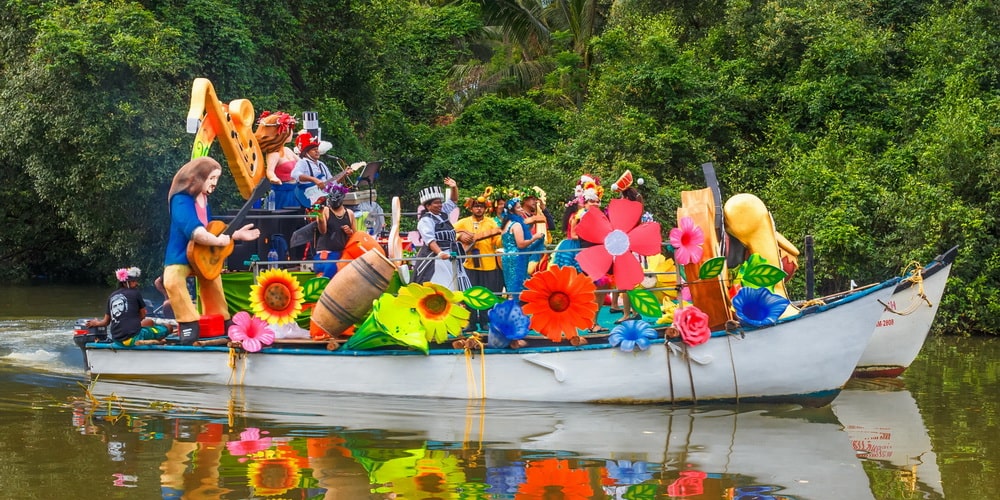 The main festival of Sao Joao in Goa is held at Siolim, which is beside the Chapora River. A unique boat festival is held on the river on June 24th. This is the monsoon season so the river is full at this time.

Boats will arrive from Arambol, Chapora, Anjuna, Badem and other places. The boats are wonderfully decorated with flowers, leaves. They have wonderful designs like guitar, birds, fruit baskets, sea creatures, mythical creatures, snakes, and dragons. Boat decorations begin many days in advance, sometimes weeks. Many villages will represent themselves by sending these unique boats. You will see the locals wearing colorful clothing on the boats.

Young men and women jump into wells, pools, streams and the river shouting ‘Viva Sao Joao’ or hail St John. It is a treat to watch them leaping into the water and swimming in it. Many even drink from the well, though this is not always safe. Sometimes the villagers will through gifts into the water, which they retrieve. It is a lot of fun. This is also the rainy season, so the locals love to get drenched in the rain and the water they are jumping into. Many tourists are also seen jumping into the water.

The jumping is a tribute to St John, a representation of his joy when he heard of the birth of Jesus while in his mother’s womb.

The Sao Joao festival is very popular in North Goa, especially in Siolim. It is not that big in South Goa.

Festivities start early in the morning with young people wearing colorful dresses. They are seeing wearing unique headgear called ‘kopels’, made with flowers and leaves. Even the tourists are seen wearing them and taking part in the festivities too. Kopels are sold on the streets for those who don’t yet have one. Many wear masks too. There are also kopel making competitions.

In some places, Sangodd, the festival of togetherness is observed. There is a parade with decorated floats, which are made with the trunks of banana trees. Those who are in Sangodd dress differently in uniforms so that they can be distinguished easily from other groups. People walking on the parade sing Mandos and religious hymns to honor St. John the Baptist.

Music competitions are held at some places to find and showcase new talents. There is both singing and dancing, making it a party-like ambiance. Often the music is traditional Goanese. Just outside the Siolim Church, at the parking space, there is singing from 3 PM to 10 PM in the night.

Everyone is seen enjoying delicious festive food. Many, both locals and tourists, drink Feni, the traditional drink of Goa made from toddy palm juice and cashew. There is a lot of Feni drinking during the celebration. Free fruits are also given away in some places. The newly married, those expecting a child, and people who own a well, give away food, flowers, a bottle of Feni, and seasonal fruits like mango and jackfruit. This is an old tradition of Goa.

What To See And Do At Siolim