Holi is a Hindu festival that marks the arrival of spring. Known widely as the Festival of Colour, it takes place over two days, and is a celebration of fertility, colour, and love.

Holi is an important Hindu festival, celebrated over two days in the month of March. It is popularly referred to as the ‘festival of colors’ as people will smear each other with colors, throw water-filled balloons, and use water guns to spray water. It is also called the ‘festival of love’ as according to Hindu mythology, Lord Krishna used to play Holi with Radha. Holi celebrates fertility, the arrival of spring, and the victory of good over evil.

Holi is celebrated throughout the country and outside as well, within the Indian community. It is popular with people of other religions in India as well. People from all backgrounds and of all ages, play Holi and have fun on the day. It breaks down all social and economic barriers. The exact date is different each year, as the festival is held on the day of the full moon.

Holi has its root in Hindu religion and mythology, but in modern Indian culture, it is more of a fun event, an occasion to enjoy, play games, and be happy. Colors are applied, water is sprayed, there is music and dancing, songs, sweets are distributed, and gifts are given away.

The History Of Holi

The history of Holi goes back a long time. It started many centuries back, probably before the birth of Christ, making this one of the oldest Hindu festivals. Even the ancient Hindu religious books, such as Kathaka-Grhya-Sutra and Jaimini’s Purvamimamsa-Sutras mention Holi.

The celebration of Holi goes back deep into Hindu history and mythology. Depending on the region, there are different legends about the origin of Holi, but mostly they boil down to the following:

The story of Holika and Prahlad comes from the sacred Hindu text ‘Narada Purana’. The story is of the King Hiranyakashipu, who was blessed so he could not be killed. But his power turned him evil, so his son Prahlad, a follower of the god Vishnu, decided to kill him. The king found out, and king planned to kill Prahlad with the help of his sister Holika. Covering herself with a magic veil, she persuaded Prahlad to go with her to the fire. But the cloak flew away and covered him. Holika burned down, and Prahlad was saved. Lord Vishnu had to himself kill the King, taking the form of Narasimha.

According to other versions of the legend, Holika could not be harmed by fire if only she ascends alone. The flame consumed her as she was accompanied by Prahlad, and the prince was left unscathed. Later, he learned that this had happened at the will of Narayana (one of the forms of Vishnu), who rewarded the prince for his devotion.

In his youth, Lord Krishna was very playful, but his skin was dark blue in color, because when he was born, an evil demon had tried to poison him. Thus, Krishna was very envious of the radiant skin of his beloved Radha.

The mother of young Krishna, to calm him, suggested that he paint the face of Radha with any color. Krishna embraced the idea and joked with a spray of color on Radha and her friends. But the girls drove him away with sticks and also began to spray water. Later, Krishna and Radha became a couple.

The pranks of Krishna, Radha and their playing with colored jets are recreated in paintings and frescoes. Over time, it has gained recognition and popularity. This turned into a tradition, and later into a full-fledged festival of colors, Holi.

In South India, the Holi festival is associated with the god of love, Kamadev. According to legend, Lord Shiva became angry and stripped Kamadeva of his body. But Shiva's wife managed to convince him so that Kamadeva can have his body for three months every year. And to this day, when this happens, the whole of nature blossoms and people become kinder and love each other. 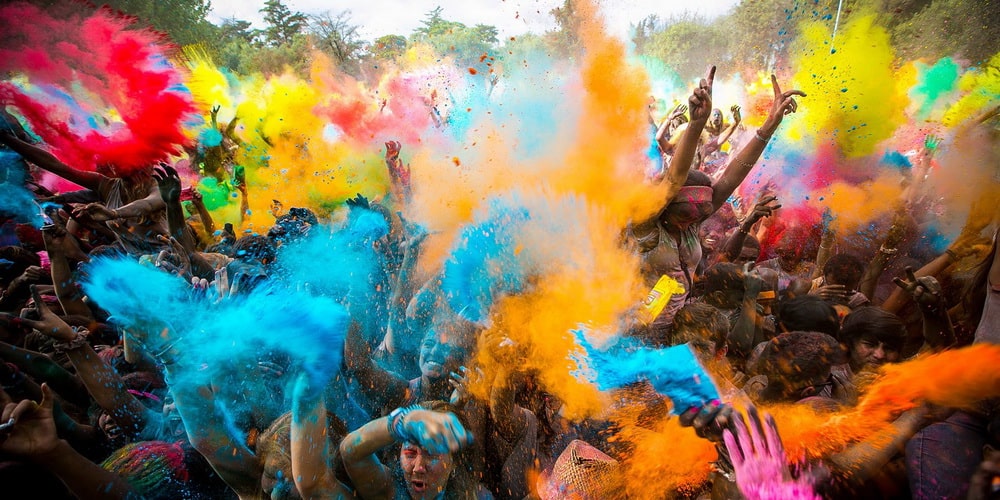 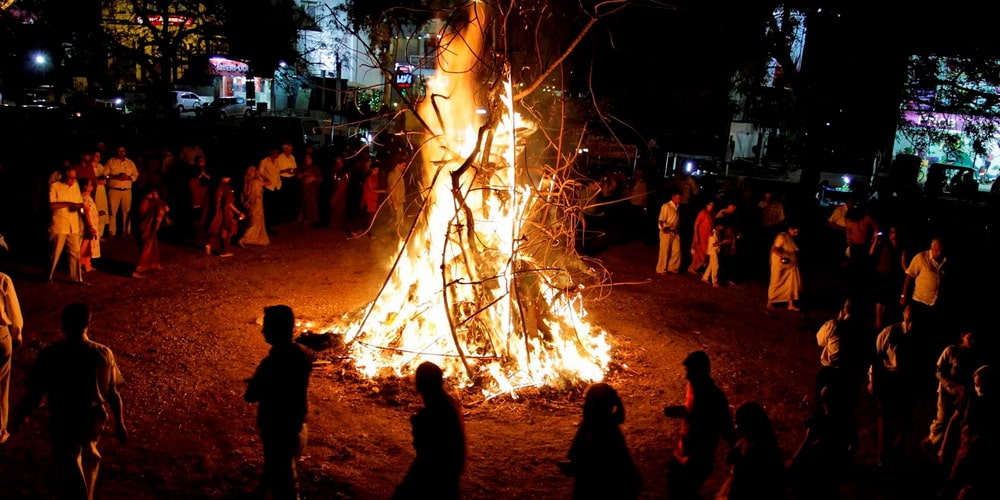 Dahan: The night before Holi

Also called Choti Holi, this is observed on the evening before the Holi day. A stuffed figure of Holika is prepared, and the effigy is burned. This is called the Holika Dahan. Holika is seen as the devil who tried to kill prince Prahlad. This ritual symbolizes the victory of good over evil, and also the triumph of the true devotee. 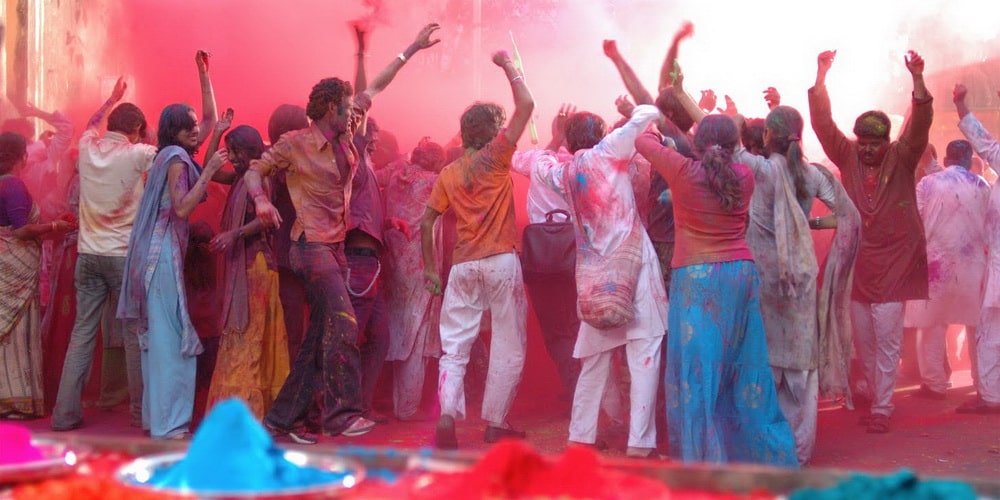 Dhuleti: second day is the festival of colour

This is held the next morning, and is the actual playing with colors. Dhuleti is the main day of Holi. Most Indians would just have this one day of Holi celebration because of its fun elements. There are no prayers or puja on this day. This is for pure fun and enjoyment. 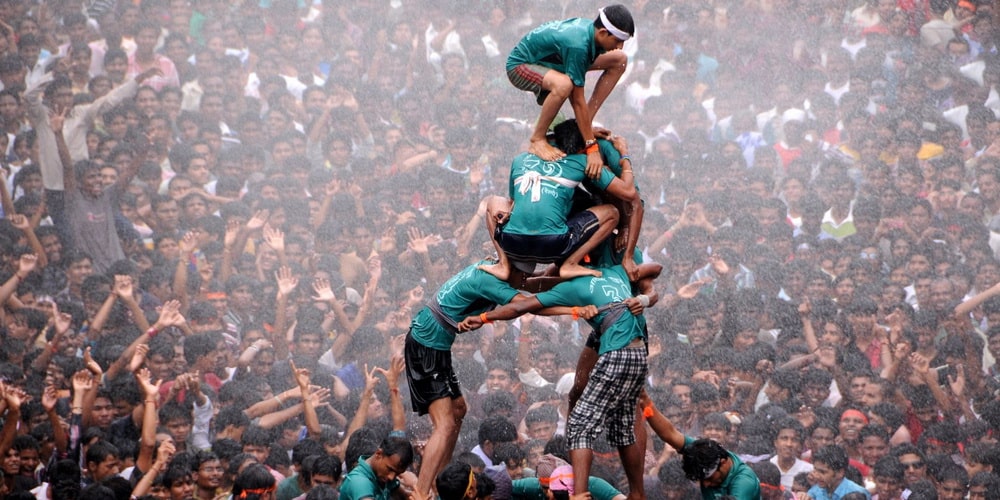 Matka refers to a pot that is filled with butter-milk. The pot is hung from a great height with ropes. Men and boys form a human pyramid to reach the pot and break it. Women try to prevent this by throwing buckets of water on the boys. This Holi ritual is popular mostly in north and west India.

One of the legends of Holi has associated the festival with Lord Krishna, who was born in Mathura in North India. So Holi is huge in Matura, the biggest festival here. People from all over the country come to Mathura to celebrate Holi. Many foreigners are seen here as well, playing with the colors.

In Mathura, prayers are offered to Lord Krishna, but Holi is mostly a fun festival. Huge processions are brought out, and people apply colors and waters on each other, in the spirit of the childhood days of the Lord.

You can read more about the various holidays in Goa here.

Holi is a big festival in Goa as well. People from all communities, Hindus, Christians, and others are seen playing and applying colors, in the cities, the beach tourist areas, and in the interior villages.

Goa is the party capital of India, and Holi is the biggest fun festival. Goa has brought these two together very well, making the celebrations unique in the country. Of course, there are those brilliant colors, music, and dancing, but in Goa, many parties are also organized to enjoy the celebrations. There are pool parties, and DJ nights. The festivals and parties are held at Anjuna, Baga, Calangute, Arambol, Candolim, Fatorda, Ponda, Vagator, Mapusa and other places.

There is also the traditional type of Holi festival in Goa, which is known as the Shigmo festival. This is held mostly in the villages. Parades are brought out. Cultural dramas are organized. Huge effigies are also burned.

There is a big parade in the city of Panaji too, organized by the Panaji Shigmotsav Samiti. Hindus visit the many temples in Goa to offer their prayers.

How To Stay Safe During Holi

The festival will often break down social norms, as everyone is seen playing together. There is physical touching too. The use of cannabis (bhang) and alcoholic drinks means people are sometimes intoxicated. So it is best to stay safe.

Here’s what you can expect in Holi. Also remember to take these basic precautions and everything should be good –

Villas in Goa for Holi

Choose from a huge range of Luxury Goa Villas for stay during Holi. They all offer free Wi-Fi, swimming pool, parking lot and comfortable spacious rooms with mini-kitchen, bathroom with all necessary supplies, mini bar, terrace and other accommodation requirements.

Here are some amazing villas:

* Price depends on arrival dates and duration of stay.